A New Year’s Resolution: To Fail

For 2016, let’s start questioning the conventional ways in which we do things.

I love this time of year: ample opportunities for reflection. Between Thanksgiving, Chanukah and New Years Eve, being a Jew in America provides the perfect schedule of events, allowing us to seek perspective and think bigger than ourselves.

Each year, our New Year’s Resolutions consist of goals that we hope to achieve. Whether focused on building material resources, improving relationships or just taking better care of our physical and spiritual selves, our targets for the new year are mainly centered around doing better, achieving more and gaining success.

So instead of seeking specific achievements in 2016, have you considered setting a New Year’s Resolution to fail? I’m not talking about taking risks, knowing that we might fail but rather, consistently going after farfetched goals where there’s no option but to fail, repeatedly.

Generally it is believed that in the pursuit of success, we must be prepared to encounter failures. To me, this reads: be careful, because if you try too hard, you’ll need to deal with negative consequences. Instead, let’s suggest the opposite: That through the pursuit of failure, we will likely encounter our greatest successes. That is, by thinking differently, encouraging innovation, and taking affordable risks, we might just witness some of our biggest breakthroughs.

We began thinking this way on a small scale at NJY Teen Camp (our teenage overnight camp), last summer. When someone had an idea, be it a staff member or camper, we went with it, regardless of the challenges that existed. Whether it was a new program initiative, structural system, potential collaboration or partnership, we explored it. What we found was that many of the ideas didn’t work but the growth that came from this was phenomenal. Meanwhile, a small number of ideas were huge successes. In many ways it sounds simple and obvious, but without fostering an open environment to failure, none of this would have been possible.

The evidence is bountiful. Every great success story we know happened off the back of failure and not just small obstacles but often, huge adversity. Bill Gates, R.H. Macy and Henry Ford all started as abysmal business failures. Oprah Winfrey, Walt Disney and Colonel Sanders were fired from their first jobs, each being told that they lacked the qualities that made them world leading in their future careers. J.K Rowling, Stephen King and Dr Seuss each encountered consistent denial letters from publishers when starting out. The list is endless.

Many would say these individuals were successful in spite of their failures but it would be more accurate to attribute their success directly to their failures. When we create a culture that supports innovation and celebrates the inevitable failures that come with it, monumental victories are likely to happen.

The difficulty is in being comfortable with making those gutsy choices and finding the right support network that will promote that around you. How often do our Jewish organizations hold back on ideas of radical change either because of budgetary concerns, political barriers or simply because ‘it’s not the way we do things here’?

For 2016, let’s start questioning the conventional ways in which we do things, let’s start promoting a culture of innovation from our organizations, let’s start budgeting for new and unknown initiatives, let’s start praising our failures for the attempts that they were and perhaps within that we can find the rare and bright sparks of new groundbreaking ideas.

We believe in providing an experience that is relevant for high school teens and nurtures them at this incredible stage of their development. 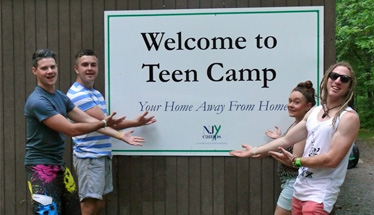 Teen Camp provides an opportunity for teenagers to learn about themselves, make a difference to the lives of others and realize their leadership potential. 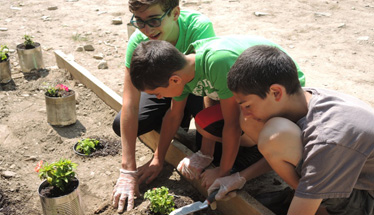